Skip to content
Where are the books set? And why?
A series about locations in my books
(The Excalibur Parchment, The Lucifer Scroll, The Prince Madoc Secret)
Part One: The Old College, Aberystwyth

The Old College in Aberystwyth was the first university in Wales. Its first home was an old former hotel that had been built on the seafront and then extended, before passing into the hands of those who wanted Wales to have its own institute of higher learning. It became known as The Old College or, in Welsh Yr Hen Goleg.
It is a key location in The Prince Madoc Secret.
Interestingly, it was a forward-thinking university from its inception, offering women the same opportunities for higher education that were offered to men—a distinct change from the normal gender-based thinking of Victorian times. It was also developed partly thanks to the efforts of Non-Conformist ministers across Wales who collected “pennies of the people” to develop a starting fund of five thousand pounds—an enormous sum in those days.
As time passed, the university outgrew the existing building. A new, sprawling modern university was constructed in the hills east of the town and today is a renowned school of higher learning. The charming seaside town is also home to the National Library of Wales.
But the quirky old building on the seafront remains. At the invitation of some of the university’s leaders—who told me that ‘my professor’ (Huw Griffiths) had to do some of his research at the university. I agreed. And I went to the Old College to take a look when I was researching and writing The Prince Madoc Secret last year.
I found a delightful, quirky building that really is an amalgam of architectural styles and construction. A magnificent triangular limestone leads into the substantial wooden doors at the entrance to the College. Inside, a massive grand stone staircase leads up to narrow halls. Circular metal staircases clash with wooden staircases. Halls go nowhere except to another set of stairs (stone, wood or metal) which lead to other halls and other staircases (stone, wooden or metal) leading down half a flight to yet more halls. Rooms, professors offices and lecture theatres feed off the main halls.

Along the seafront side is a set of rooms occupied by Prince Charles when he was a student here learning Welsh and preparing for his investiture as Prince of Wales.
The Old College is mostly devoid of students now. They’ve moved up to the main campus east of the town. Instead, there are plans to revive the Old College as a place for special events and concerts among other things.
But it was just the right place for Stone Wallace and Mandy Griffiths to use as a base for their research into the legendary Prince Madoc. It’s a building steeped in history and yet timeless; a place imbued with a sense of learning and Welshness, set in a magnificent location beside the old castle which dates from 1277.
History, culture, legend, idiosyncratic styles are all gathered at The Old College. It is worth a visit and worth a prominent place in the book.
The Old College 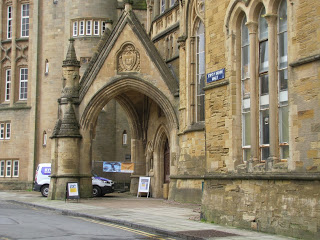