The Power of reading: It changes lives

On Saturday I spent the morning selling my novels at an author’s event that was part of a farmer’s market. I (and the other authors around me) were taken aback by the number of people who brushed us off, proudly proclaiming as they did so that they can’t be bothered with reading, or don’t read at all, or as middle aged lady said to me, it’s a waste of time.
And I thought of my grandson.
Joshua is nine. He was born with what is called a congenital heart defect.  In his lifetime he has had a myriad of health issues, including a major stroke, and four open heart surgeries plus other procedures, tests and medical interventions too numerous to mention.
Through it all, Joshua has been a happy child. He has a wicked sense of humour, teases, laughs, and generally enjoys life.
But the past six months have been difficult for him. He is now beginning to realize the physical and other limitations place on him by his health issues.  Where other kids ran and romped in the playground, he was ostracized because he was “too slow” and just plain not good enough. In this sports-mad culture, that’s a huge downer. And he was having medication issues which caused him to be unfocused. Earlier this month things got so bad he was taken to the hospital. Our great fear and the cardiac doctor’s worry, was that his heart was failing yet again. Certainly the symptoms pointed to cardiac failure. But the echo and other tests showed that there was no change in his heart; it wasn’t failing. So, what was it? That’s when the diagnosis of circumstantial depression.
A once happy, funny, smiling kid was now sad, unfocused, and generally withdrawing from life. But the past week has seen an enormous change is this fabulously courageous and wise child.

He discovered the joy of reading. He discovered that being good at soccer and basketball—as much as he wanted it—was not the all-important thing he thought it was. Reading was able to take him to new places, to discover new worlds and engage in living a variety of new lives.

Now I won’t lie to you. These are kids’  graphic novels (what we used to call comic books). But they mean the world to him.  He devoured first one, then another. And proudly proclaimed to his mom and dad that these books “changed my life!”
But graphic novels will soon be displaced in his reading lists by regular books. I remember being entranced as a child by the Swallows and Amazons series by Arthur Ransome. And the Narnia books by C.S. Lewis.
I was no good at sports either. But those and other books opened new vistas for me and led me into an eventual career in journalism and communications and, in the last few years, as a novelist.
But, just as with Joshua, it started with one book. One book that led to another and another, that changed my life and pulled aside the curtain of my ‘normal’ life, taking me to places I’d never imagined.  I met fascinating new people, was challenged by outrageous villains and saw them conquered. As my reading list grew, I traveled beyond earth to new universes and I time-jumped from the medieval times of knights and kings to future visions of what earth would be.
A waste of time? I wish that woman had been willing to engage with me so that I could tell her this story.
On Sunday, I traveled to Toronto where Joshua’s father is the Senior Pastor at a church celebrating its anniversary. Following the morning service there was an outdoor BBQ and party with lots of fun for the kids. Reading has indeed changed Joshua’s life. The sad kid seemed to be gone. He ran around, played, participated—including getting ‘pied’ in a pie tossing event.
His smile had returned. His world was changed from darkness and sadness to fun again, to excitement, to participation, to joy.
Sure, there are some other factors contributing, including a tweak of his meds. But he himself knew that it was books that made the magical difference. 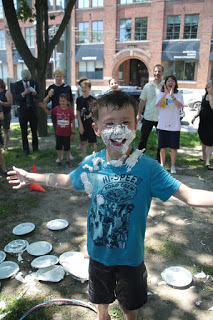 The power of reading;  It does indeed change lives!